Distracted Driving: The Most Common Cause of Collision

Home » Distracted Driving: The Most Common Cause of Collision 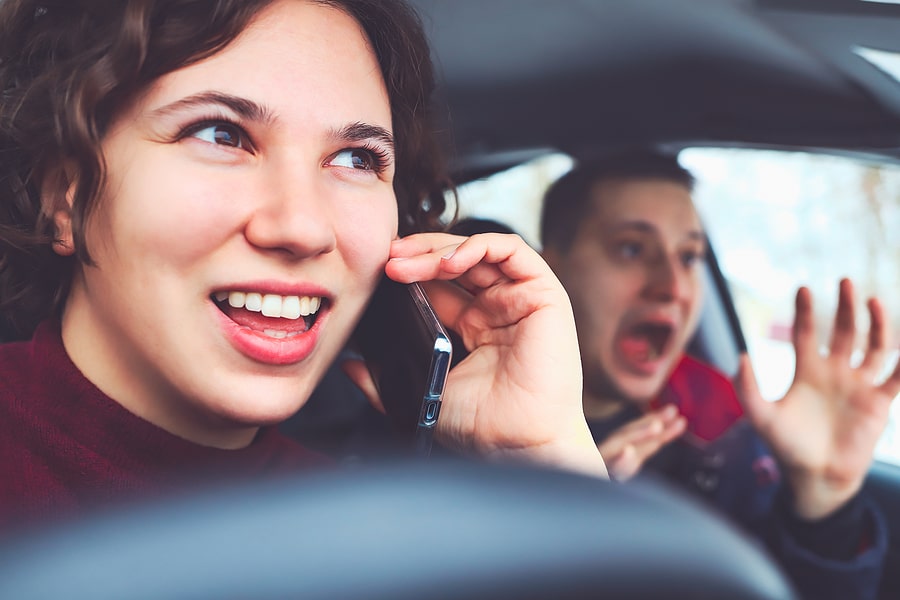 “I just looked down for a second.”

All too often, these responses, and others like them, come tumbling from the mouths of people who have just caused a serious collision. Unfortunately, distraction serves as one of the top causes of collisions.

The NHTSA notes that distracted driving claims more than 3,000 lives each year. In addition, it causes substantial injuries to many victims of those accidents. Nevertheless, as many as 42 percent of high school students admit to texting or emailing while driving.

Distracted driving involves taking the driver’s hands, eyes, or attention off the road while operating a motor vehicle. Each distraction involves a serious breach in the driver’s duty of care to others around him.

Most drivers do not think twice about glancing away from the road for a moment or two, whether they need to change the settings on the radio or check the directions on a GPS device. Unfortunately, visual distractions can pull the driver’s attention from the road and make it impossible for the driver to see what has happened around him.

Without that warning, a driver may drive straight into a collision without even hesitating to reduce the risk of an accident, whether the problem includes a child darting out into the street or the car in front of him slamming on his brakes.

Driving a vehicle safely involves keeping both hands either on the wheel or ready to respond quickly. Some drivers, however, will take one or even both hands off the wheel to engage in other behaviors, from texting and driving to changing a station on the radio.

Unfortunately, often, drivers will take their dominant hand off the wheel to perform those tasks, which means they may lack the ability to respond quickly and safely in the event of a hazard. While it may take only fractions of a second to get the hand back on the wheel, those fractions of a second could prevent a driver from reacting fast enough to stop an accident.

Many drivers find it easy to grow distracted behind the wheel, especially when it comes to allowing their attention to drift. The roads may all appear the same.

Drivers who have spent a long time behind the wheel may find themselves growing drowsy and turn to distractions to keep themselves awake. Other times, drivers may allow their attention to drift from the task at hand keeping the vehicle safely on-course and turn instead to other activities and behaviors, from singing along to the radio to chatting with someone in the vehicle.

Even daydreaming or, in some cases, needing to use the restroom can cause drivers to grow increasingly distracted behind the wheel, increasing the odds that they will cause an accident due to overall inattention.

Most people think first of texting, or at least cell phone use in general, when they consider the dangers of distracted driving. After all, cell phone use poses a potent distraction that takes the driver’s full attention off of the road. However, cell phone use does not cover the only distractions that a driver may have to contend with behind the wheel.

#1.Conversations With People in the Vehicle

However, drivers engaging in highly involved conversations with other people in their vehicles may also suffer from substantial distractions. A very engaging discussion, or a contentious one, can cause drivers to pay more attention to the conversation than they do to the road around them, which may cause them to miss potential hazards and ultimately cause a serious accident.

#2.Programming or Using a GPS Device

GPS devices and apps offer considerable benefit to many drivers, whether they need to navigate to a place they have never visited before or they simply need to check on traffic as they head to their destinations.

Many traffic apps will warn drivers of potential hazards before they appear, including cars stopped on the road, heavy traffic, or even accidents. However, those apps can pose a potent distraction when people start paying more attention to them than they do to the road around them.

#3. Eating or Drinking in the Car

Most drivers do not think twice about eating or drinking behind the wheel. Eating in the car seems, on the surface, as though it can save time and effort, not to mention allowing them to pull that first crispy fry out of the bag while it remains hot.

Drinking, especially without a straw, can also serve to obscure the driver’s vision.

#4. Dealing With Kids and Pets

Kids and pets, in the car, can pose some of the most potent distractions that a driver may have to deal with. A distracting child may make it very difficult for the parent to keep eyes on the road. Sometimes, parents may even turn around to deal with their children or reach behind them to fetch a fallen item. Furthermore, parents may have more attention on their children than the other cars moving around them, which could spell disaster out on the road.

Pets can pose an equally potent problem, especially if allowed to roam around the vehicle while the car remains in motion. A roaming pet can not only cause a distraction when the driver tries to call it down, it may result in serious problems when it interferes with the driver’s ability to steer or puts its paws or nose into the gear shift.

Some women become very talented at putting on makeup quickly. Trying to do it while driving, however, could spell disaster. As people put on makeup behind the wheel, they must look at the mirror, rather than at the road. Putting on makeup also involves taking at least one hand off the wheel. Unfortunately, many drivers continue to try to put on makeup or finish getting ready for the workday while they drive down the road, raising the odds of a serious incident.

With the growth of modern technology, it has become easier than ever for drivers to grow distracted by changing the music in their vehicles. Even older vehicles may pull drivers’ attention from the road as they change the station on the radio or adjust the volume. More modern vehicles, on the other hand, often have music controls tied to the driver’s phone.

The driver may flip through albums, pull up an app, or try to find the perfect song. Even a driver who does not pull out the phone directly, choosing instead to use the vehicle’s controls to change music settings, may have his eyes on the screen in the vehicle, rather than on the road ahead.

Temperature controls do not seem like they should pose a potent distraction. Simply turn the heat or air up or down, then move on. Unfortunately, some people have a hard time setting things exactly where they want them without looking.

Here, too, modern vehicles may pose a more potent problem, since they have more options for heat and air conditioning settings. Not only do drivers have to decide exactly where they want to set their temperature controls, they may need to adjust them for passengers in the rear or even on the passenger side of the vehicle. The more drivers have to fiddle with those controls, the more their attention may pull away from the road.

Many people use smart, connected devices, particularly watches, to quickly respond to information that would normally appear on their phones, including text messages. Unfortunately, those smart devices may prove an even more potent and problematic distraction than smartphones themselves.

While many drivers have learned not to keep their phones in reach when on the road, smartwatches are frequently right there on the user’s arm. It can prove much more difficult to ignore a buzz from the user’s hand. Not only that, many users think they can get away with just sneaking a glance down to see the basic content of the message.

Smartwatches, however, have much smaller screens than the average smartphone. Text has to scroll across the screen for the user to read it, which may make it much more difficult for the user to take in the necessary information at a glance. Ultimately, that may lead to more time with eyes focused off the road, which may increase the risk of an accident or the severity of a collision.

#9. Watching Something Outside the Car

Sometimes, events outside the vehicle may seem more interesting than watching the road itself. A driver may shift his attention to an accident that took place nearby, to construction, or even to reading the store names as he drives past an unfamiliar shopping center, rather than keeping his attention on the road. Those external distractions can take over so much of a driver’s focus that he fails to pay attention to his tasks on the road, which may result in a serious collision.

#10. Zoning out or Daydreaming

Zoning out or daydreaming may not seem dangerous, especially on a familiar road. Unfortunately, many drivers may zone out so far that they stop paying attention to what happens around them, raising the risk of a collision.

Daydreaming can cause a driver’s attention to drift so far from the road that they no longer notice potential hazards, or even cause them to drive absentmindedly, which could cause them to cross into another lane or cut off another driver. Zoning out could also cause a driver to respond absentmindedly instead of mindfully, resulting in challenges like rear-end collisions or sideswipe accidents.