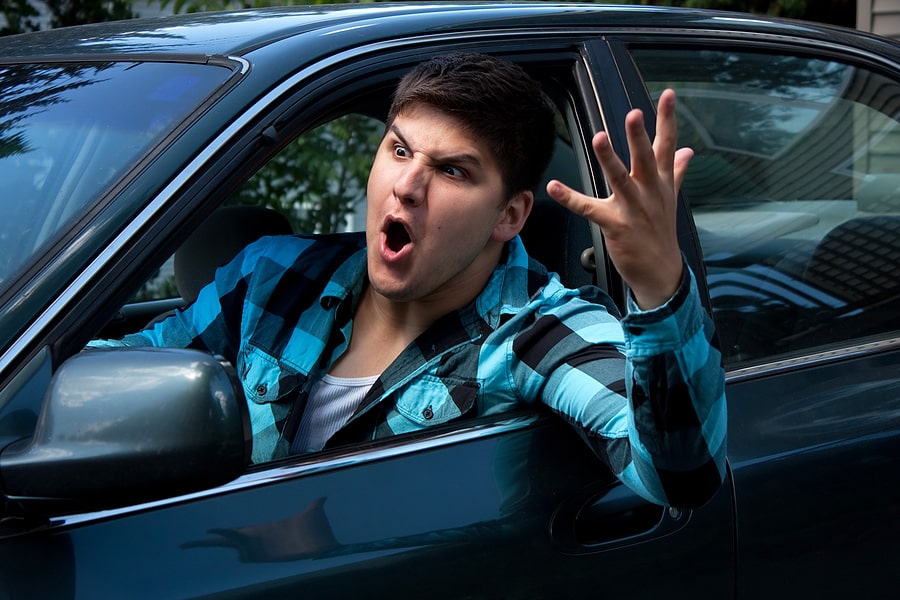 When drivers get frustrated out on the road, anger can grow to immense levels. Unfortunately, as anger grows, so does the driver’s likelihood of engaging in potentially dangerous behavior.

Road rage can cause a driver to make unsafe choices or ignore the other people sharing the road, ultimately resulting in accidents that include severe injuries.

What is Road Rage?

An aggressive driver who engages in tailgating may feel frustrated by the front driver’s slow speed or irritated because the driver pulled over in front of him or blocked him off. Tailgating includes traveling too close to the vehicle in front, often so close that the driver of the rear vehicle does not have adequate time to come to a safe stop if the front driver has to stop abruptly.

Unfortunately, tailgating can result in a serious rear-end collision, which can cause a variety of injuries ranging from whiplash to traumatic brain injury.

At high rates of speed, accident risk increases substantially. The more a driver increases his rate of speed, the more control he needs to have over his vehicle. Unfortunately, drivers suffering from road rage may have less control over their vehicles than other drivers, even drivers who choose to speed to reach their destination faster.

Speeding may also increase the severity of a collision since it increases the force associated with the accident.

Traffic signals help guide drivers safely as they move through traffic: showing which lane has right of way, indicating how to safely travel down specific streets, or simply breaking up the flow of traffic so that each driver can safely proceed through an intersection. Unfortunately, raging drivers may ignore those common traffic signals entirely.

Frequently, drivers suffering from immense road rage will choose to speed through intersections without even looking at other vehicles around them, which may substantially increase the risk of a collision.

#4. Cutting off Other Vehicles

Often, a raging driver will cut off the vehicle that bears the brunt of his anger. Frequently, that means making unsafe lane changes. A raging driver may swerve through traffic to prove a point. Not only can that raging driver pose a danger to himself and the driver he targets, he may force other drivers to react quickly to avoid a collision.

Road rage frequently starts with verbal expressions of fury or hand gestures intended to show other drivers that the raging driver has grown frustrated. Unfortunately, yelling or making obscene gestures may increase anger, rather than helping the raging driver vent some of his anger and calm down.

Yelling or obscene gestures may also trigger rage in another driver, causing the road rage cycle to continue and increasing the odds that an accident will occur.

#6. Blocking the Flow of Traffic

A raging driver may attempt to block the movements of other drivers, especially those he perceives as causing his anger. He may try to pull over in front of the other driver and slow down enough to stop that driver’s progression, often completely blocking a lane or even multiple lanes of traffic to prevent the other driver from moving forward.

Sometimes, the raging driver may couple this behavior with getting out of his car and trying to start a physical altercation.

#7. Trying to Force a Vehicle Off the Road

Raging drivers may, in some cases, escalate to acts of violence, including trying to force another vehicle off the road. In some areas, particularly around steep drops and sharp turns, forcing a vehicle off the road can result in a serious rollover accident or cause substantial damage as a vehicle gets forced into another object.

Sometimes, the driver of the other vehicle may have to decide between hitting the raging driver and hitting something or someone else.

When a raging driver escalates to the point of violence, he may actively ram into another vehicle. Ramming into a vehicle can cause immediate damage to both vehicles and, in some cases, serious injury to the passengers in those vehicles.

Unfortunately, some raging drivers may not stop with a single collision. They may back up and try to ram their targets a second time, or multiple times. That loss of control may mean increasing injury for everyone involved in the collision.

In some cases, raging drivers may pull a weapon on the targets of their ire. Raging drivers who pull a weapon may brandish it and issue threats, or even pull out a gun and start shooting. Often, however, raging drivers will simply indicate that they intend to shoot and try to convince the other driver to get into an altercation. Ignoring those threats and getting to a safe place can help de-escalate the situation.

Sometimes, a driver suffering from road rage may choose to follow the driver he feels has wronged him in some way to continue the altercation. The raging driver may try to convince the other driver to pull over or follow him until he stops, then further escalate the confrontation.

Road rage can have a trigger, or it may emerge unexpectedly.

#1. Inconveniences on the Road

Many drivers struggle with road rage when they face inconveniences on the road. They may have a hard time, for example, dealing with potential delays, including slow-moving drivers, traffic jams, and construction. In heavy traffic, road rage tends to occur more often than when drivers have plenty of room to maneuver safely and independently.

Some drivers suffer from road rage when they have faced a hazard on the road, especially a hazard they barely avoided. For example, drivers may become frustrated when they notice other people speeding or swerving through traffic, or they might become angry when they notice another driver talking or texting on the phone, especially in heavy traffic. Often, road hazards can trigger a surge of adrenaline that may lead to increased road rage.

Sometimes, drivers suffer from road rage primarily because they did not leave adequate time to reach their destinations, especially in heavy traffic. The driver may notice the clock ticking down, but lack the means to get to his destination on time. Unfortunately, when a driver knows that he will end up late for a meeting, event, or encounter, he may have a hard time keeping his temper under control. That temper may then bleed onto everything around him.

#4. Aggressive Behaviors on the Part of Other Drivers

Sometimes, the behavior of other drivers can trigger road rage. Horns honking, obscene gestures, or verbal abuse can all trigger anger in many drivers, leading to serious cases of road rage. Occasionally, loud or aggressive music can also trigger road rage in some drivers.

For some drivers, road rage may not occur as a result of external stimulus, but rather as a result of internal stress. A driver who feels stressed in other areas of life may feel more stressed out on the road and have a likelihood of engaging in a variety of more dangerous behaviors, including an increased overall risk of road rage. Stress can cause a driver to suffer from road rage even when facing relatively mild stimuli.

What to Do In a Road Rage Encounter

If you encounter a driver exhibiting road rage, it can prove very frightening. Many people have no idea what to do with a driver who suffers from immense rage. Should you call the police? Try to engage the driver and calm him down? Follow these steps to help de-escalate the situation and reduce the risk of serious injury.

When possible, do not look at other drivers in their vehicles, including a driver who may show signs of road rage. Try not to engage directly with that driver. Do not roll down your window, hit your horn, or engage in other activities that could indicate that you intend to engage with the situation. Instead, keep your cool and keep your focus on your own driving.

2. Stay in your vehicle.

Whether you notice another driver following you or pull up at a gas station, only to discover that a raging driver has joined you there, do not get out of your vehicle. Your vehicle offers some level of protection from a raging driver.

Getting out of your car could serve to further escalate the situation, making the raging driver angrier or allowing him more personal access to you. Avoid rolling down your window or verbally engaging with the rager.

If you get into an accident with a raging driver, especially if the driver gets out of the car still angry, you may want to remain in your vehicle and call the police instead of getting out of the car to assess the damage. While you may have to interact with the raging driver to properly document and report the accident, it’s wiser to wait until the police arrive at the scene to get out of your car, so you can keep yourself safe.

3. Put distance between you and the raging driver, if possible.

If you notice a driver engaging in aggressive behaviors out on the road, try to put as much distance as possible between you and that driver. You may need to reduce your rate of speed or even change your route to avoid further engaging with that driver.

Sometimes, you may need to pull off the road to a safe place, especially if you have noticed the raging driver speeding ahead of you. However, try not to pull into a poorly lit or generally deserted area, since raging drivers may escalate to physical violence if they can get you out of your vehicle.

4. Do not engage in competition with another driver.

Sometimes, drivers may try to convince you to engage in competition. They may try to get you to race or engage in a pattern of pulling over in front of one another. Driving involves high rates of speed and can invoke a feeling of stress during even a friendly competition. Instead, keep your attention on the road and on arriving safely at your destination.

If you notice a driver engaging in very dangerous, reckless, or aggressive behavior around you, contact the police if possible. The local police can help de-escalate the situation or get it back under control.

You may need to contact the police if the driver brandishes a weapon or attempts to harm someone else on the road, or if you notice aggressive behavior getting out of hand that could endanger others. If possible, pull off the road or have a passenger call the police, rather than trying to talk on the phone yourself.

A Lawyer Can Help After a Road Rage Accident

An accident involving road rage can leave you shaken. In many cases, road rage accidents involve severe injuries, particularly if the raging driver actively rammed the vehicle or engaged in extremely dangerous behavior. You may deserve compensation for injuries sustained in a road rage accident.

An attorney can help you learn more about your right to compensation, including how to move forward with a claim. Talk to a car accident lawyer about the compensation you may deserve.