Sideswipe Collisions: More Serious Than You May Think

Home » Sideswipe Collisions: More Serious Than You May Think 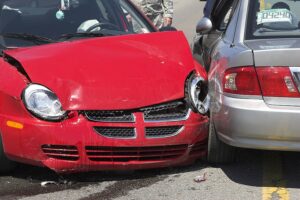 As motor vehicle accidents go, drivers tend to think of sideswipe collisions as relatively minor. Scary, certainly, but also less likely to cause serious injuries and fatalities than, say, a head-on collision or a T-bone accident at an intersection.

If someone tells you “I got sideswiped,” you might assume the individual’s car sustained some cosmetic damage, a sheared-off rearview mirror or some dents and paint damage to the door panels, for example but that the driver survived the incident more or less unscathed.

Your instinct can prove wrong. Sometimes, a sideswipe collision has drastic, harmful, and tragic consequences. In this blog post, we explore that version of a sideswipe: how it happens, what it entails, the injuries it can cause, and how a lawyer can help you secure compensation if it happens to you or a loved one.

What We Mean When We Talk About Sideswipe Collisions

To get us started, let’s establish a definition for sideswipe collisions generally.

A sideswipe collision consists of any vehicle-on-vehicle collision in which the initial point of impact occurs on the side of both vehicles, such as:

Notice that we define sideswipe collision by the initial point of impact between two vehicles. It’s from that specific definition that sideswipe collisions acquire their reputation as “minor” accidents. The initial accident happens in passing, so people usually assume that means it’s over quickly.

That’s not necessarily true, however. The initial swipe of the collision may happen in an instant, but that’s often just the beginning of a sequence of potentially catastrophic events. That first impact can easily send either vehicle spinning out of control, or push either vehicle into an opposing lane, or force either vehicle off the road. Secondary accidents, including collisions with other vehicles or fixed objects, and rollovers, accompany many sideswipe accidents, turning what started as a minor initial impact into nothing less than a major motor vehicle accident.

Numerous factors, many of them preventable, contribute to the causes of sideswipe accidents. Below, we discuss three common mistakes made by drivers and others that can lead to a dangerous sideswipe collision.

Driving over the speed limit or too fast for road conditions invites a host of dangerous consequences, including causing a sideswipe collision. For one thing, speeding gives drivers less time to react to and avoid sideswipe hazards, like an unexpected narrowing of lanes or an oncoming vehicle that has strayed over the centerline. For another, speeding increases the likelihood that a driver might lose control on a rough or slippery road surface, or at a curve in a highway.

Speeding also heightens the danger of a sideswipe collision turning into a major accident. A speeding car, if knocked off course by a sideswipe, is more likely than a slow-moving one to spin out of control or to roll over. The force of the collision imparted by a speeding vehicle will also tend to increase the severity of damage done to other vehicles, and to knock those vehicles out of lanes and into the paths of others.

A driver’s distraction behind the wheel of a moving vehicle commonly leads to a sideswipe collision. Distractions take a driver’s eyes off the road, hands off the wheel, and mind off the task of driving safely. Any of these lapses can interrupt the driver’s ability to keep a vehicle traveling in a straight line, and in just a second or two, the car or truck can veer far enough off-course to sideswipe a vehicle in a neighboring or oncoming lane.

These days, smartphone use behind the wheel contributes to a disproportionate number of distracted driving accidents, because it involves a dangerous mix of visual, manual, and cognitive tasks. But distractions abounded for drivers even before screens high-jacked their attentions. Watching the rear-view mirror, talking to passengers in the back seat, and eating and driving at the wheel all constitute distractions that can have deadly consequences.

Alcohol and drugs, when consumed separately or in combination, impair a variety of human motor and cognitive functions critical to driving safely.

Drunk and drugged drivers risk causing a sideswipe accident because they experience (among other deficits):

Impaired driving is illegal, but unfortunately, that doesn’t always stop drunk and drugged drivers from making the tragic decision to get behind the wheel. Sideswipe collisions occur when those drivers veer into adjacent or oncoming lanes, misjudge the distance separating their vehicle from another, and drive too fast for road conditions.

The Human Toll of Sideswipe Collisions

As we said at the outset, the initial side-to-side impact of a sideswipe collision may not cause much harm to any occupants of the vehicles involved. A sideswipe involves a glancing blow, and does not initially impart the dangerous forces on human bodies that other, more direct collisions might.

Still, the secondary effects of a sideswipe can prove catastrophic for drivers and passengers alike. A sideswipe collision can trigger any number of serious follow-on accidents, including head-on collisions, T-bone accidents, and rollovers.

Any of these can cause fatalities, as well as severe injuries, such as:

These and other harms can take a heavy toll on sideswipe accident victims and their families. Accordingly, even though the initial impact of a sideswipe might not cause many injuries to vehicle occupants, a sideswipe might still result in life-altering physical, emotional, and financial difficulty.

Victims of sideswipe collisions typically have legal rights to seek compensation for the harm they have suffered. With the help of an experienced motor vehicle accident injury lawyer, they can pursue the at-fault parties for the collision for money damages.

Unlike many other types of motor vehicle accidents, the individuals most harmed by a sideswipe collision might not include the party at fault for causing their injuries and losses. As we’ve explained, the most catastrophic damage inflicted by a sideswipe usually occurs in the secondary accident that follows the initial impact. The driver whose carelessness or recklessness leads to the initial collision may escape that second accident entirely.

That does not let the at-fault driver off the hook for liability, but it can make the process of determining fault in a sideswipe accident a bit more complicated than in other types of collisions. Experienced lawyers, insurance adjusters, and other accident investigators may need to dig deep into the details of an accident to pinpoint the initial sideswipe collision that triggered a much larger and more damaging crash.

The initial impression given by a head-on collision, for example, might be that one of the two drivers made a tragic mistake that led to the accident. But investigation may uncover that neither of them actually bears any fault, and that instead, a third driver’s sideswipe of one of the two vehicles that collided head-on constituted the true cause of the crash.

That is why it’s always important to hire an experienced attorney whenever you have suffered injuries and losses in an accident. You may not even remember the initial sideswipe that triggered a larger collision, but a careful investigation can uncover multiple parties who may owe you compensation.

Consult with an experienced auto accident attorney right away after any crash that harms you or a loved one, especially if a sideswipe triggered it. You and the lawyer have no time to lose in collecting forensic information that might help you identify the party or parties at fault.

What compensation can you recover for sideswipe collision injuries?

One or more parties may owe you significant financial compensation for the injuries and losses you suffered in a sideswipe and (more likely) the secondary accident that followed it. Generally speaking, state laws nationwide entitle crash victims like you to obtain payment for two, and potentially three, categories of damages you suffered.

First, you’re generally entitled to receive economic damages (sometimes called “special” damages), which include all of the financial costs you incurred in the sideswipe collision and any secondary accident it triggered.

Second, you’re also entitled to seek non-economic damages (sometimes called “general” damages), which include the wide range of other, non-financial difficulties and challenges you face because of the accident and the injuries you suffered in it.

Third, you may also have the right to ask a court to award you additional punitive, also known as exemplary, damages. The law in most states permits courts to order the at-fault party to pay these extra damages in a case in which the at-fault party engaged in extreme, outrageous, or intentionally harmful conduct in connection with causing the sideswipe accident that harmed you.

No one can guarantee that you will receive any of the damages listed above, nor can anyone promise in advance that you will receive any particular amount of money. You can give yourself the best possible chance of securing the maximum possible amount of compensation, however, by hiring a skilled motor vehicle accident injury lawyer to represent you.

We have explained in this blog post the many potential dangers of sideswipe collisions. Despite their reputation as “minor” accidents, sideswipes can cause major injuries and tragic losses.

If a sideswipe collision left you or a loved one injured or worse, you likely have rights to financial compensation from the party or parties at fault. Do not wait to seek the help of an experienced car accident attorney to represent you in obtaining that compensation. The sooner you speak with an attorney, the stronger your chances of securing maximum compensation given your specific circumstances.