Speeding is a Factor in 26 percent of Fatal Accidents

Home » Speeding is a Factor in 26 percent of Fatal Accidents 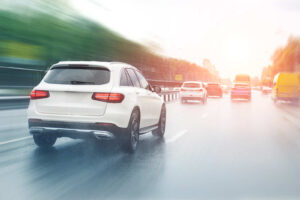 Many people do not think twice about increasing their rate of speed, especially when they get in a hurry on the road. Speeding can, they often assume, help them reach their destinations faster, which seems like the ideal solution when drivers get in a hurry.

Unfortunately, according to the National Highway Transportation Safety Administration, speeding also carries an underlying hazard: It factors into around 26 percent of fatal accidents each year.

The Hazards of Speeding

Some people take speeding for granted, assuming that it will simply help them get to their destination faster and cause relatively few problems along the way. Unfortunately, speeding often leads to more severe consequences than the driver may think especially when coupled with other potentially dangerous driving behaviors.

The faster you drive, the faster you need to react in the event of an emergency. Your vehicle needs time to slow down, steer, or stop. You cannot force it to stop or maneuver faster, even if you feel very comfortable and confident behind the wheel.

As a result, at a high rate of speed, you must react faster than if you face the same set of circumstances at a slower rate of speed. Unfortunately, many drivers do not have adequate time to react once a threat makes itself known, especially if they have engaged in other dangerous driving behaviors, including tailgating or swerving through traffic.

#3. Speed Can Increase the Risks Associated with Driver Distraction

Distraction kills out on the road, especially at high rates of speed. Distracted drivers who have chosen to speed may never notice a potential hazard as it comes their way. Often, those drivers may end up with much more substantial injuries than they would have suffered if they had slowed down.

At a high rate of speed, a vehicle travels much further during those moments of distraction. In the seconds a driver looks away from the road, much more of the road will pass him by than if he had become distracted at a lower rate of speed. As a result, the driver may have a hard time reacting appropriately to potential hazards, even if he notices them.

#4. Speeding May Increase the Severity of an Accident

Sometimes, an accident would have happened regardless of the driver’s rate of speed. He might not have had adequate time to stop, or to maneuver around a hazard. However, at a high rate of speed, the driver hits the obstacle with more force.

That increased force travels through the vehicle, resulting in more serious damage to both vehicles and potentially more serious injury for everyone in them. At high rates of speed, drivers may have greater odds of suffering more serious injuries, including traumatic brain injury, spinal cord injuries, broken bones, and internal injuries.

#5. One Driver’s Speed May Influence Another

Speeding often forms a vicious cycle. One driver speeds up to get to his destination faster, or even to move over and change lanes on a highway. The driver next to him or in front of him speeds up. The driver behind him speeds up.

Suddenly, it seems as though every vehicle on the road has increased its rate of speed to match the others around it. Frequently, drivers who prefer to drive at slower speeds may feel pressured to increase their speed more than they feel comfortable. Younger drivers, in particular, may prove prone to giving in to this form of peer pressure out on the road.

Why Do Drivers Speed?

1. Drivers may get in a hurry.

Sometimes, drivers speed simply because they feel that they need to rush to meet their destination. They may leave the house late, fall behind because of traffic, or habitually fail to leave themselves enough time to reach their destinations.

In reality, however, speeding may not save drivers as much time as they think. Moving 10 miles per hour over the speed limit will only save 10 minutes over the course of an hour. In a shorter journey, it might save even less time.

Furthermore, traffic patterns can prevent speeding drivers from making additional progress toward their goals. Speeding may also create more delays than it resolves, especially as drivers create traffic jams due to their reckless or aggressive behavior on the road.

Speeding, for some drivers, simply becomes a normal pattern. They speed on their way to work. They speed on their way home. Unfortunately, they may not even recognize the pattern, even as their speed increases and they pose a growing danger to themselves and others. A driver in the habit of speeding may not even realize how high his speed has risen until he loses control of his vehicle, which could mean a potent risk to everyone around him.

Drivers who speed habitually may also offer another hazard: they may show a greater likelihood of growing distracted while speeding. Frequently, drivers become more distracted in familiar territory as they zone out and pay attention to their own thoughts or even try to take care of other tasks instead of focusing on the vehicles and terrain around them. Distracted, speeding drivers can prove a substantial hazard on the road.

3. Drivers may speed because of road rage.

Road rage often comes out at the worst possible moments, causing drivers to engage in behavior that they would not even consider under normal circumstances.

Road rage may emerge as a result of frustration with others on the road or delays, particularly if a driver has watched his time slip away and knows that he will have to arrive late to an activity he planned to attend. Drivers suffering from road rage may speed to show up drivers that have passed them or to get rid of some anger following a long delay.

Unfortunately, road rage may also cause other dangerous behaviors, including a loss of attention on the road, that can make raging drivers very dangerous to others around them.

Alcohol often removes a driver’s sense of judgment, causing him to engage in much more reckless behaviors than he would engage in under normal circumstances. That recklessness may extend to speeding. Intoxication, however, may also interfere with a driver’s overall motor control, making it difficult for him to control his vehicle at those rates of speed. Intoxicated drivers also often have slowed reaction times and more difficulty responding to potential hazards on the road, which can make speeding even more lethal.

5. Some drivers may speed as they become more familiar with a specific road.

They may feel that they know the road and can handle its hairpin turns or dangerous drops more easily. However, that familiarity with the road may not account for obstacles like pedestrians, other vehicles, or animals in the road. Furthermore, dangerous weather conditions can increase hazards on even the most familiar road, raising the risk of a serious collision.

6. Drivers may feel more confident than they should about their ability to handle potential hazards.

While drivers who speed might not come out and say that they feel the rules exist for other people, but not for them, many drivers become extremely confident in their ability to maneuver at high rates of speed.

Often, that confidence becomes extremely misplaced. Drivers, however, may fail to realize the hazard until they have already caused a serious collision. Speeding drivers may feel a false sense of security if they have managed to avoid collisions in the past, especially if they have a long history of experience on the road. However, aging drivers may have slowed reaction times, which can make speeding more dangerous as they age.

Furthermore, speeding does not care about a driver’s experience when a serious hazard arises. While an experienced driver might have better odds of successfully maneuvering out of a potential accident scenario, experience does not guarantee that the driver will not sustain serious injury.

7. Speeding may occur because of a lack of clearly posted speed limit signs.

Ideally, speed limit signs should appear at regular intervals on the road so that drivers can judge their speed accordingly and slow down when needed. Unfortunately, many roads across the United States still lack adequate signs to determine how fast drivers should safely drive along those roads.

A lack of speed limit signs can make it difficult for drivers to determine a safe rate of speed. Some drivers do not know how to judge and predict speed limit signs, which may raise the risk that they will drive faster and ultimately cause an accident.

8. Some drivers speed just for the thrill.

Many drivers enjoy the thrill of pushing their vehicles and trying to reach a higher rate of speed, even though they know the associated dangers. Younger drivers, in particular, may try to speed on purpose, flying in the face of danger and trying to show that they can handle it.

They may want to show off in front of friends or loved ones, or they may simply enjoy the thrill of speeding. Thrill-seekers may also prove more likely to engage in other dangerous behaviors on the road, from speeding around curves to tailgating, swerving through traffic, and showing examples of road rage.

What Should You Do After a High-Speed Collision?

High rates of speed may seem innocent until an accident occurs. After the accident, you have to figure out what to do next.

Report the Accident to the Police

High-speed collisions often involve serious injuries. If you have obvious signs of injury, you suffered significant property damage, or you have any questions about your physical capability after the accident, go to the nearest urgent care center or hospital to seek treatment as soon as possible.

The sooner you seek medical treatment, the better your odds of making a full recovery. Your trip to an urgent care center or hospital can also serve as evidence of when your injuries took place, which can make it easier for you to get compensation for those injuries.

Talk to a Lawyer

If another, speeding driver caused your accident, or you have questions about the compensation you may deserve after an accident, a lawyer can help you understand your right to compensation and pursue a car accident claim.

Do not try to handle your claim on your own, especially if you have serious injuries. Instead, contact a car accident lawyer as soon as possible to schedule a free consultation, go over what led to your accident, and discuss your right to compensation.